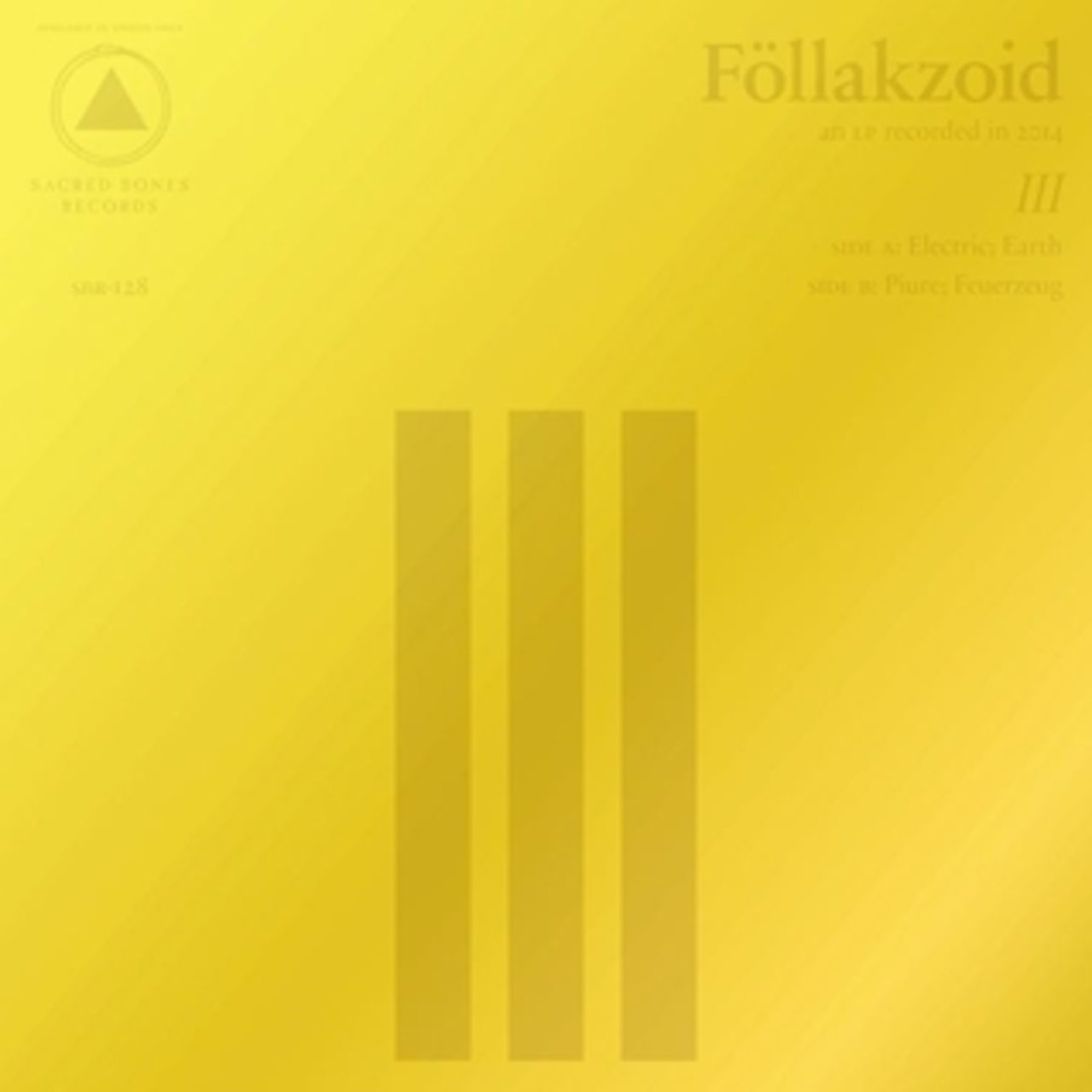 The Chilean band Föllakzoid specialize in the pillowy sort of rock music designed to shield you from the world for a while. Huge, looping riffs stretch across deeply repetitive percussion, creating an atmosphere somewhere between trance and stupor. The word "psychedelic" is never far away when reading descriptions of the band, but three albums into their career, they’ve explored many colors on that particular spectrum. Beginning with outward-facing, Josh Homme-indebted rock on their eponymous debut in 2009, they switched to something closer to krautrock on 2013’s II. Here, they tighten their sound, cutting out the meandering themes and occasionally sloppy riffing. There are only four songs, but extra details emerge slowly on repeat listening.

German producer Uwe Schmidt, better known as Atom™, has been brought in as a collaborator, bringing the discipline of his immersively repetitive electronic music with him. He’s also credited with playing a Korg synth that belonged to Kraftwerk during the 1980s. Föllakzoid can’t let go of their roots entirely—at best, they’re channeling the LSD-laced guitar patterns of Loop and Spacemen 3; at worst, vocalist Juan Pablo Rodrigues leans too hard on foggy vocal effects that recall Brooklyn psych also-rans (and labelmates) Psychic Ills. They’re most effective when working somewhere between their rock instincts and Schmidt’s concise approach. Opener "Electric" recalls a more-guitar heavy version of LCD Soundsystem’s "Get Innocuous!", where a patient build combines with a subtle layering of elements to deliver the album’s most transcendent moment.

Föllakzoid barely shift course over the 45-minute III. The riff that dominates the closing "Feuerzeug" is only a breath away from the one that towers over "Electric". "Piure" is the best example of that here, mixing up backward-masked electronics, menacing ambient noise, and a guitar churn that sounds like it was played by Can’s Michael Karoli. In general, the album treats its journey as circular, a path of tiny incremental steps that eventually leads us back to where we began.

In 2014 Föllakzoid played a set at Primavera Sound, leaving behind this video memento to mark the occasion. The beginning is marked by the reading of a poem by the Chilean writer Vicente Huidobro, which is heavy on birthing and religious imagery, where each line is so dense in implication it’s easy to just disappear into it for a while. It’s a handy comparison for the type of feeling Föllakzoid try to convey in their music, where their vaguely epic songs—only one track here, the nine-minute “Feuerzeug”, is less than 10 minutes in length—gain an allure by gradually stacking up moments of powerful suggestion. It doesn’t always reach the level of spiritual purity it could, but there’s a touch of steel and a sense of pacing that was missing from Föllakzoid’s prior work, positioning III as a gateway for a much a deeper dive into altered states.